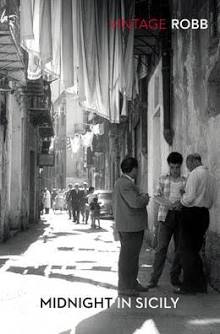 Much in the same way that those who learn a language end up with a much deeper knowledge and command of its grammar than the natives, it’s also true that foreigners can, if they live someplace long enough, get to know that country’s history better than the locals. In this sense it’s not that hard to believe that an Australian might be the author of one of the best books in Sicily, mafia and power that I’ve ever read. Sure, it helps if that Aussie is Peter Robb.

The mafia is a political problem, used to say a professor at uni. Eliminate the protection, the connivance, the quid pro quo that link organised crime and power and the mafia will disappear was his theory, and I subscribe to that. It’s impossible to talk about one without mentioning the other, and it’s impossible to talk about Sicily – or Italy in the 1980s and 1990s – without mentioning both.  Robb didn’t shy away from either and what resulted was a compelling, courageous book. Perhaps, and I’m still surprised to say this, better than his “A Death in Brazil” that I hold in such high regard.

Those who love Robb’s photographic descriptions will find them there, as strong and vivid as ever. The Palermo markets. A cohort of transexuals. A visit to Leonardo Sciascia’s hometown of Racalmuto at nightfall. And more. There are also mouth-watering forays into cuisine and, as it’s his custom, in that grey area where art meets sex, religion and humanity’s many weaknesses. But the centrepiece of this book is, as it’s inevitable, the murderous tango between Cosa Nostra and the Democrazia Cristiana, DC for short.

I sometimes wonder why those American TV shows on intrigue and mystery are such a hit over in Italy. Compared to what went down in the 1980s and 1990s – the ascent of the Corleonesi, the famous kiss between Riina and il divo Giulio, the season of terror – “House of Cards” is as dumb as any of Donald Trump’s unscripted speeches. It’s a murky, convoluted, world made of things hinted, half said, half glimpsed. And dead bodies. More than 10,000, somebody calculated.

Making sense of it is hard: most, in Italy, haven’t even tried to. There are a lot of books on the subject: some are good, a fair few are rubbish, but most don’t venture in the darkest of the dark chambers of this palace, the one where Cosa Nostra and the DC (the party, let us not forget, that governed the country for half a century) shook hands, hugged and kissed. “Midnight in Sicily” does precisely that, in a style that is neither judgmental nor educational. As for his Brazilian chronicle Robb tells a story with his brains but, chiefly, with his heart. He chooses sides, he honours those that in his view are worthy of accolades and lambasts those who don’t. But, more importantly, he never stops professing his love for a land that many stigmatise, some make fun of but few really want to help.

2 Responses to “Midnight in Sicily” by Peter Robb, Vintage.