There are twenty regions in Italy (or perhaps it’s only 19; Molise’s existence, much like dark matter, is still a matter for debate); together in 2018 they hosted a whopping 429 million tourists, half of them foreigners (of whom at least three haven’t been ripped off by a cab driver).

Say “Italy” and the mind will travel to the domes of the Eternal City, to the rolling hills of Tuscany or to the canals of Venice. Yet, this post is not about any of them. This post is about a region lying 11th in the rank of the most visited, with five time less tourists than Veneto. Even less than tiny Liguria.

A paltry 15 million visitors graced Piedmont, the land sandwiched between the Alps and the Lombard land of plenty, of their presence; four million of those chose to stop only in Turin. And perhaps there’s a reason. Contrary to the Milanese, ever so skilled at boastful self-promotion, the Piedmontese are a byword for modesty, even shyness. Esageruma nen, “let’s not exaggerate”, is the regions’ leitmotiv. Us Piedmontese are way too self-aware of this, this or this to shout from the rooftops how beautiful this land is. 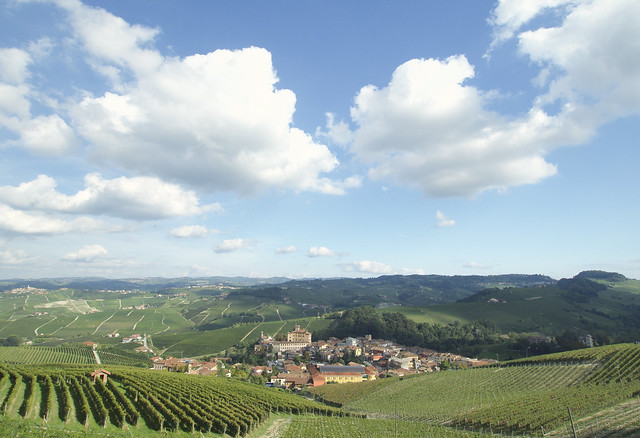 Monforte d’Alba is your typical Piedmontese village. Old stone houses. Newer ones in red bricks and anodized aluminium window frames. A square with the local bar. A few roads sneaking along the ridgeline where the village has been built, evidently to guard against raids from the neighbouring potentate. Elderly villagers stopping to read the obituaries affixed to the city hall’s notice board. The Carabinieri doing patrols on a Subaru.

Yet there are subtle differences, hints to show this isn’t your usual, boring, Piedmontese farmland – maize, rice, cattle – bisected by train lines and motorways. Somebody, for starters, has drawn the silhouette of a rhino on a corner wall. Then there’s a quirky auditorium, modelled after a Greek amphitheatre. And the view. 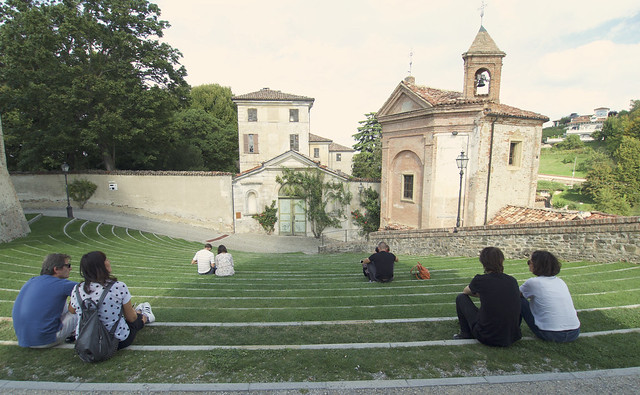 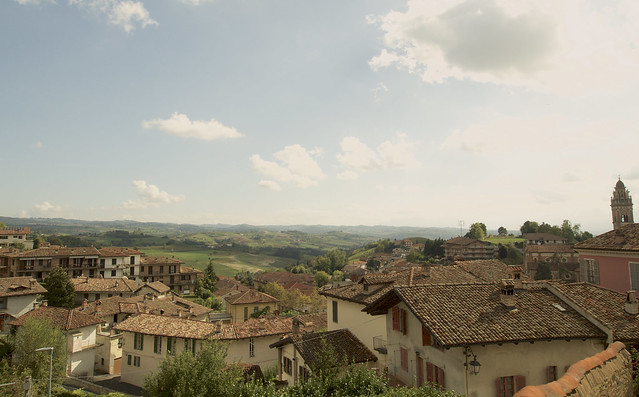 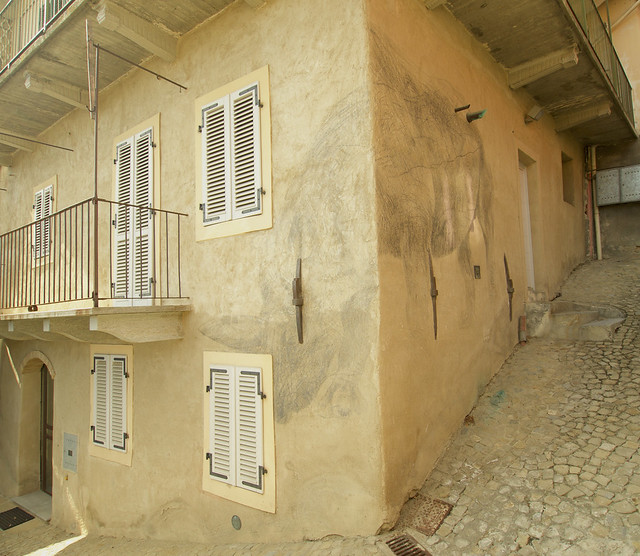 This is the Langhe. Eleven thousand hectares between the provinces of Asti and Cuneo, a band of hills in a region that’s otherwise extremely flat or extremely mountainous. Eleven thousand hectares almost entirely dedicated to the production of nuts – Ferrero, and Nutella, are from Alba after all – or wine. There are fourteen Denominations of Controlled Origin, DOC in the Italian version of the acronyms, and more than 300 DOC and DOCG-certified producers. Numbers worthy of Tuscany, of Chianti. Yet this isn’t a place where Sting has a mansion and where IT billionaires have plonked villas on every hilltop.

The Langhe, in spite of baronial estates such as Barolo and Montezemolo, still has a modest edge. Folks, here, might have a private wealth account at some posh bank but will still drop at the bar in their corduroys and Wellingtons. This is Beppe Fenoglio’s country, the gritty, realist writer of La Malora. 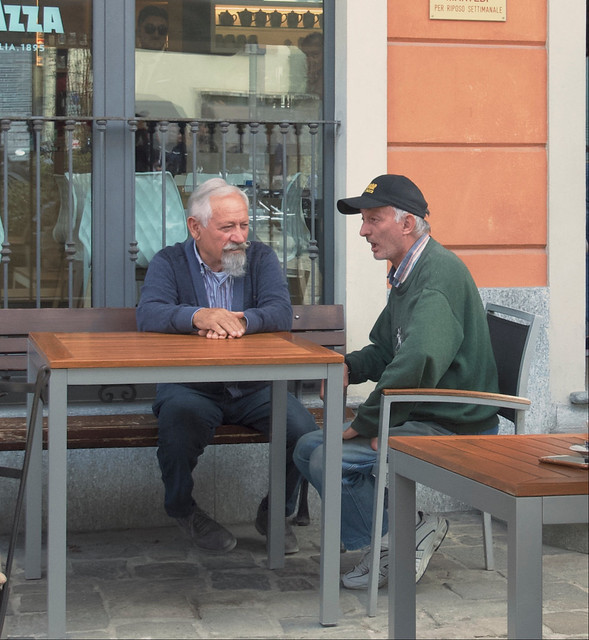 People still live here, they haven’t moved out and sold everything to Dutch retirees. They live and die and bring new life in, like the twins that have graced the barmaid’s family, as she says when people notice the blue and pink ribbons on the door. Two men, one of whom sports a pair of moustaches worthy of King Vittorio Emanuele II, chat at a table that is strangely devoid of chalices of bianco. Further down the road a wedding is about to start, the bride being walked to the altar by her proud father. 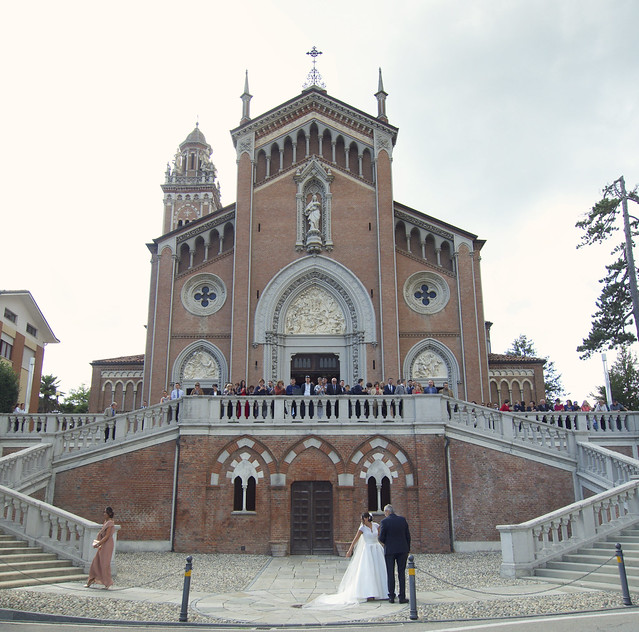 La Morra is a contradiction to everything I’ve just written. Perhaps it’s because of the majestic balcony that is both public square and view point over the hills, but the town is busy with visitors and modern art installations. Again another rhino, this time used as a bench and climbed by scores of kids, despite the misspelled sign that reads “Sitting only”. Cyclists drink a spritz in their Lycras emblazoned with the adverts of cement makers, postal services and cable TV companies, their expensive bikes parked in front of them. A man plays an ancient instrument, medieval in its looks and complexity, kids hurriedly pleading their moms for una moneta to throw in his hat. Centuries ago peasants must’ve danced to those Occitan tunes, here on the belvedere. 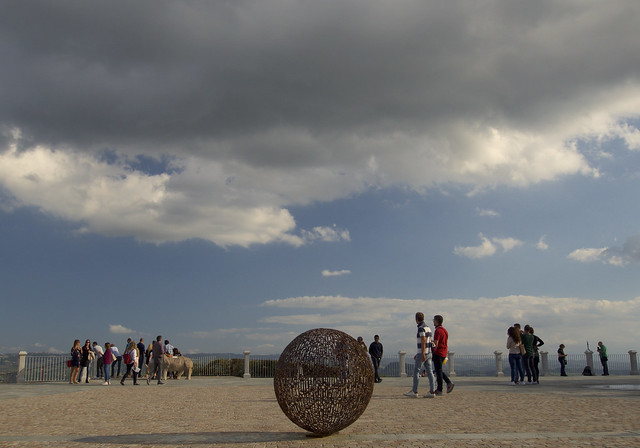 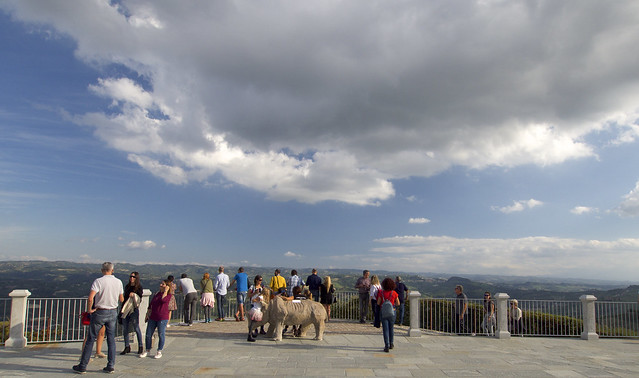 Let’s cross the region, let’s drive northwards. Skip Turin, only a few years ago so magnificent and today stranded in a puddle of neglect by a mediocre city administration that is too inept even to be corrupt. Let’s venture further north, in the least visited corner of Piedmont. Let’s drive until the mountains rise up to block our way towards Vallée d’Aoste.

It’s Monday, early autumn. The valley floor is engulfed in mist and, alas, smog, courtesy of this part of Italy being nothing but a giant cul-de-sac. The mountains, instead, are clear, cool and empty. Gone are the majority of the wandering bands of cattle that have migrated up here in the summer; gone are the vacationers and the skyrunners. The villages too are empty as most of their inhabitants descend towards Biella and the flatland to start their week at school, in the office or factory. We’re basically alone up here. 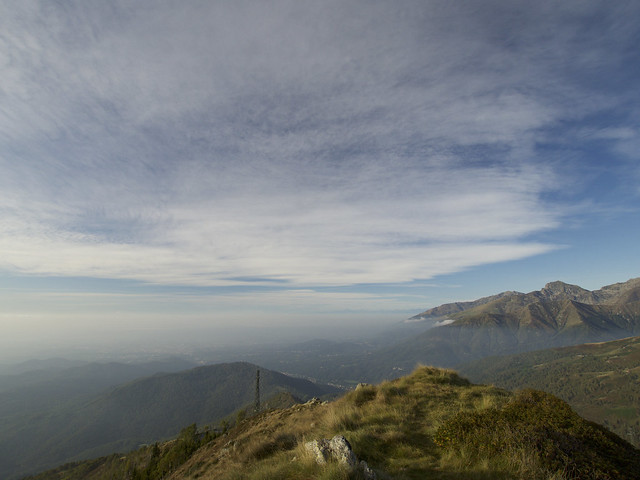 Yet that’s not the case. A band of horses is munching on the short grass on the ridge where we are standing. Two of them, a couple of extraordinary beauty, stand cinematographically on the edge between direct sunlight and shade, the stallion eyeing protectively his beautiful mare. 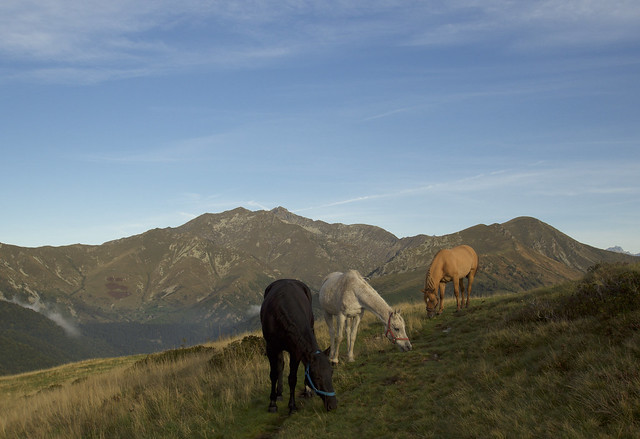 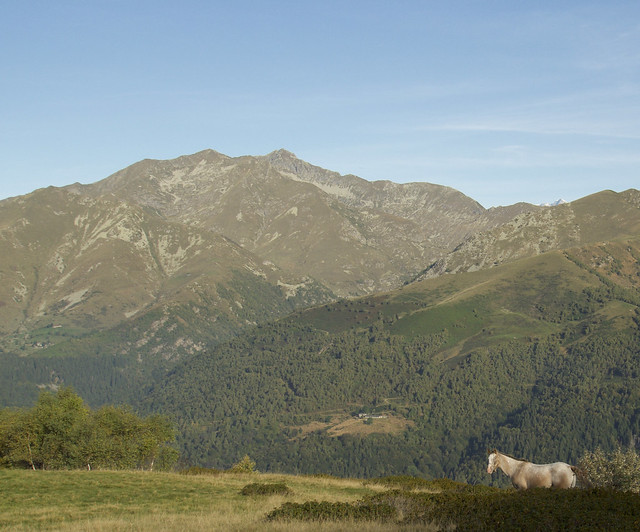 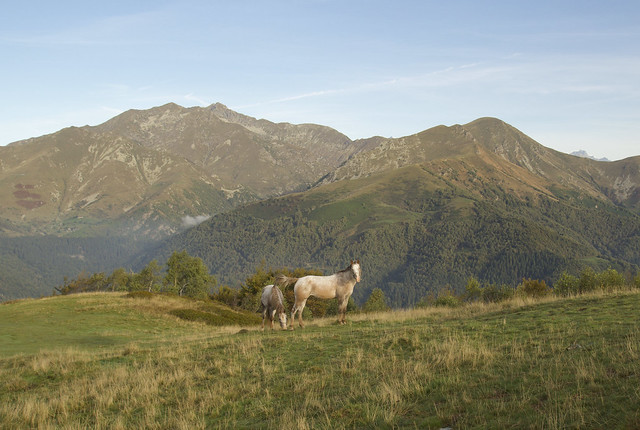 Suddenly, the ground reverberates with the thumps of a galloping beast. It’s running downhill, from the peak of the col towards us, the sun shining behind it and into our eyes like a Messerschmitt fighter preying on a defenceless bomber. To fly or to flight, to run or to stay, these are the questions. Unconsciously we crab-walk sideways, away from the trajectory of the tumbling animal, hoping it won’t alter its course to hit us. Blindly, I press the shutter of the camera. Perhaps somebody will find our bodies flattened to a pizza, recover the SD card and the world will know that Sasquatch exists and lives in the Italian Prealps and not in Cascadia.

The llama – because of course it is, what else could it be but an Andean camelid in the Alps? – gallops inches past us in a whirlwind of flapping ears, fur and fat tail waggling in its wake. I suppose that being almost run over by a roving llama is something that can only happen in Italy’s 11th most visited region. 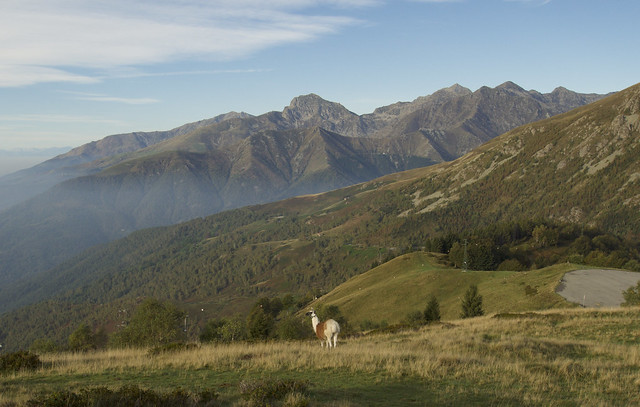